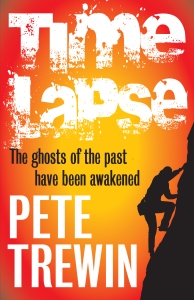 Climbing is a theme in my second novel published in 2015; in particular the protagonist’s obsession with making a solo ascent of a notoriously dangerous climb – ‘Time Lapse’. The title refers to a moment in climbing when your life is at stake and everything moves in slow motion. It also relates to a lapse in behaviour and morality – not actually doing evil but rather not acting to stop it as all good men should – a long time ago which resurfaces to haunt the protagonist. The book was include in Awesome Indies’ list of books that meet mainstream publishing standards.

A despicable crime carried out twenty years ago by a teenage gang. The proceeds of a heist hidden away.

Chris Crosby was involved and could have intervened but he didn’t. So he is just as guilty. But where to hide? How about the most obvious place.  He is a surveillance expert investigating organised crime in Merseyside – in particular the activities of an outfit led by Alison Mason who has had to take control when her partner was drowned in a botched drug smuggling operation. Chris is also a rock climber with ambitions to solo the hardest and most dangerous climb in the area, ‘Time Lapse’. Talk about not attracting attention to yourself.

But the ghosts from his past have been awakened. Can Chris avoid exposure? Can he shop the gangsters? Can he climb – and survive – the route?

M56. Cheshire. 4 pm. Lovely autumn day. Rush hour. The air con was broken so if he opened the window he was hit by a hot blast of exhaust fumes. And Chris Crosby was caught short. When you spent all day in a van it was an occupational hazard. He kept a jar in the back but you could hardly use it when you were driving down a motorway. All he could do was try and hold on to the next service area. While idiots in company cars tailgated him at ninety. And cut him up on the inside at a hundred.

He couldn’t race them and risk being pulled over. Not with his past. And, in any case, a white Transit van wasn’t the ideal racing car. Though with its tinted windows you could sit in the back in comfort and not be noticed whilst using that marvellous piece of  surveillance equipment: the standard human eyeball. The high tech stuff – the computers, cameras and microphones – were fine but to Chris there was nothing like a good look.

But today that had backfired. He hadn’t noticed the black off-roader, a Cherokee Jeep, sitting at the back of the car park until he was nearly finished.

He’d counted and photographed them in. Sixty five. He’d have to check the names when he got back to the ranch then split them into sales, admin, installers and telesales – i.e. cold callers. Check the Job Centre, sickness, tax. And not let Simple Simon stick his big nose in. If he was kept out of this job then it could be tied up and Chris could quickly complete the final report on “Snug as a Bug Double Glazing”, as it said on the sides of their vans. Times were hard. Everyone in “Safe n’ Secure” knew it. If you didn’t complete assignments to the satisfaction of clients and keep the work flowing in, the company would go pop.

The trouble was, he couldn’t work out how this scam worked. They advertised as honest joes in the local media. In a business rife with conmen and fraudsters. No heavy sales pressure. No tricks to make punters sign up at once. Yet they seemed to be doing well.

His mobile went. He switched it off.

Google Alert on the hands-free laptop. He checked it. Fuck! Someone had entered a search using his old name. After a lapse of twenty years since the crime. For a moment he could see the image. The big oak tree. Blood on the bracken and grass.

He closed his eyes for a moment and shook his head hard. He noticed something in the rear-view mirror. A Cherokee Jeep was right on his tail-gate; huge and black. So close that Chris could clearly see the driver’s big face and broad bison-like forehead. And there was something strangely familiar about him. The vehicle was so close that the slightest mistake and they would both be dead.

He thumped the accelerator pedal to the floor and tried to pull away but the Jeep behind quickly caught up with him. Chris eased his foot off the pedal and waited, cruising along in the middle lane, just under the speed limit. The Jeep dropped back.

An articulated lorry gradually caught up with him on the inside. A junction was coming up. He turned off across the path of the lorry without signalling and just managed to escape onto the slip road. He caught a glimpse of the Jeep braking hard but the artic was too long and the Jeep had to continue down the motorway.

Just before he reached Helsby village, he turned off up a single track road. He stopped in the small car park at the top of the hill. Deserted. He was bursting. He jumped out and raced for the trees.

Back in the van, he switched on the laptop and checked the e-mail from Google. The search had been made from an unidentified location. No replies. He had covered his tracks well. He sighed, closed his eyes and leaned back in his seat.