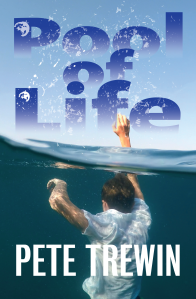 This is my fourth novel, due to be published in April 2020 by AIA Publishing. As the title implies ‘water’ is a major theme. It makes up most of our bodies and much of the natural world. You can steal it, use it to create energy, use it as a medium to poison a city, and, of course, you can drown in it. You can also use it as a metaphor as in Jung’s famous quote ‘Liverpool is the pool of life’. Which is where I got the idea for the title.

‘Ex-cop Jack Gordon is struggling to keep his PI business in Liverpool afloat, with his staff playing hooky and a surveillance suspect deciding to head-butt him when his stake-out is blown. Pool of Life by Pete Trewin is tightly wound, moving in a staccato beat through the seamy underside and scaly upper crust of Liverpool with the stakes rising higher with each explosive encounter. Trewin does a masterful job of teasing the reader with clues as Jack finds that not only are his two new cases related but also a decades-old suspicious disappearance of a young woman is rearing its ugly head. The pressing question, though, is whether or not Jack can survive long enough to solve the puzzles. This is a book you can’t put down. Just when you think you might want to take a break from reading, Trewin drops another morsel on your plate, and you just have to keep reading. A definite five-star read.’ Charles Ray, Awesome Indies Book Awards assessor.

‘Liverpool P.I. Jack ‘Flash’ Gordon’s business is in trouble. The drop in income and threat to his career is somewhat mitigated by a strange case in which Sarah Gladwyn, threatened by a stalker, wants Gordon to become involved not only in protecting her and mitigating the threat, but in addressing the stalker’s obsession with her family’s history and politics. This is far more than a case of individual obsession. Events evolve in complexity and danger to where Gordon is attempting to mitigate not an individual conundrum, but a terrorist threat to Liverpool’s water supply. The emotional overlay Gordon brings to his investigations and life encounters is one of the factors that sets Pool of Life apart from other P.I. stories of investigative challenges.  With not only this case but his career and reputation on the line, Jack must employ all of his investigative savvy to rescue not just one woman and her family, but an entire city. From a soldier recovering from PTSD to wild parties, jealousies, stormy relationships, family connections, and disappearances that lead to murder, Jack has his hands full juggling more than one dilemma. These draw readers into a case replete with quirky, strong personalities and changing relationships that keep readers on their toes. The dialogue and encounters excel in interactions designed to keep readers both guessing and immersed in the lingo, atmosphere, politics, and influences of Liverpool’s residents in general and Jack’s life in particular. The result is a rollicking good thriller that juxtaposes intrigue and murder with a detective’s own personal evolution in a story that will keep readers engaged right up to its unexpected conclusion.’ Diane Donovan Mid West Book Review‘

‘Pool of Life, author Pete Trewin’s latest novel, is a noir detective story in the classic mold. Trewin evokes the time-proven trappings of a Raymond Chandler book, with Jack Gordon, the somewhat seedy private eye. taking on a wealthy client who begs for help without bringing the attention of law enforcement or her husband. His story also recalls the 1974 detective film Chinatown, especially with Gordon getting punched in the face and sporting a bandage and plaster over his nose, a la Jack Nicholson’s character, J.J. Gittes, and with both plots involving water issues. Pool of Life is worth the read, with an interesting twist at the end.’ Blue Ink Reviews

Jack ‘Flash’ Gordon’s private investigation business in Liverpool is in trouble, what with staffing issues and changing technology. So when the ex-copper is commissioned by Sarah Gladwyn from an old Welsh family to investigate a series of threats and attacks from an anonymous assailant it seems like a lifeline. The stalker is obsessed with the family’s role in oppressing the local slate workers in Victorian times and stealing Welsh water for use in England. Sarah’s husband, Oliver Gladwyn, ex hippy traveller and now a green entrepreneur, plans to build a barrage across the Mersey and provide clean energy for Merseyside. You would have thought that the stalker would approve, but no.
It’s a great opportunity for Jack so what could possibly go wrong? How about murders, discovery of skeletons in cupboards, conspiracies, bent coppers, corrupt politicians and violent gangsters. And a terrorist threat to Liverpool’s water supply. Flash Gordon? He’ll need to be Jumping Jack Flash to get through this one.