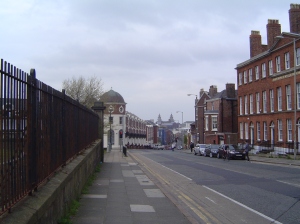 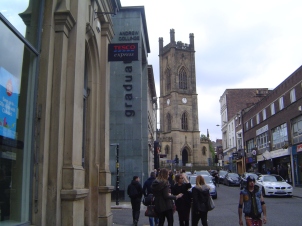 Many of the settings in my novels are in Liverpool and Merseyside. Two books are always close to hand: The Buildings of Liverpool and Liverpool Conservation Areas, both produced by the Liverpool Heritage Bureau

In the sixties Ian Nairn said of Liverpool (see the Conservation page on this site):

‘…if Liverpool can get into top gear again there is no limit to the city’s potential. The scale and resilience of the buildings and people is amazing – it is a world city, far more so than London and Manchester. It doesn’t feel like anywhere else in Lancashire: comparisons always end up overseas – Dublin, or Boston, or Hamburg.’

I have lived in Liverpool for many years now and I can remember when it was a disaster zone – the Albert Dock was derelict and due for demolition and many of its Georgian terraces were boarded up. Whilst I would quibble with some of the development decisions made – the brutalist multi-storey car parks, for instance – I can only praise the regeneration of the city centre since that time. My favourites are:

Georgian streets: It is a well-known fact that Liverpool has more Georgian listed buildings than Bath. Of particular note are Rodney Street, the Canning Street area and Mount Pleasant (which includes Abercromby Square).

Central commercial area based on Castle street. Many fine Victorian and Edwardian commercial buildings. I love the recent work done to link this area with the Albert Dock. Of particular note is the high quality street furniture. Well, the Duke of Westminster has got plenty of dosh to spare…

Albert Dock World famous and rightly so. I remember when it was boarded up and due for demolition.

William Brown Street with its magnificent St George’s Hall, library & museum. The frontage to the main railway station opposite has been recently improved to great effect.

Liverpool Parks Liverpool has some truly magnificent parks, including Sefton Park, Princes Park, Newsham Park, Allerton & Calderstones Parks, Woolton Woods/ Camp Hill (the latter have superb views over the Mersey). You can link the parks in south Liverpool for a gentle ramble or a bracing run – as some of my characters do.

Liverpool villages Many villages have been swallowed up by the growing city but retain their quaint character. Woolton, Gateacre, Childwall Abbey, St Michaels, Wavertree, West Derby, Edge Hill, Walton. Lark Lane wasn’t a village but it feels like one. I live close to Woolton village. A lovely illustrated book by Tony Moscardini Woolton & Gateacre Architecture and Heritage details the history & architecture of the village and its environs and is worth seeking out. In Martin Edwards’ crime thrillers set in Liverpool, Woolton is where Premier League footballers and aspirational villains seek to live, though I think he means the top of the hill not lower down where I am.

Prescot is a historic market town close to Liverpool, now in the Knowsley district. I worked on its regeneration in the eighties – read how we did it on the Articles page on this site.

Garden Suburbs Town & Country Planning first started off as a response to the ravages of the industrial revolution in association with social reformers who furthered the development of low density housing projects where people could live in peaceful, pleasant and healthy surroundings. Wavertree Garden Suburb was developed by a co-operative in the early 1900s and influenced the Council and its Director of Housing, Sir Lancelot Keay to develop a number of garden estates across the city in the thirties. Unfortunately right-to buy has resulted in the destruction of much of the character of these estates via out of character ’improvements’.