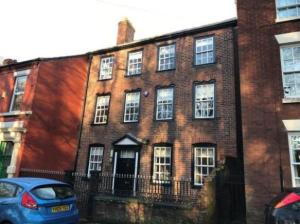 I have closely followed the development of the Shakespeare in the North proposal to the point where construction is about to start on a site opposite to Prescot’s historic parish church (The photos show the proposed theatre and one of Prescot’s listed buildings. Link here to article in The Stage https://www.thestage.co.uk/features/2018/birth-of-merseysides-shakespeare-north-playhouse/).

Back in the 70s, I was a young graduate in one of my first jobs, charged with preparing a plan for Prescot town centre. This was shortly after local government reorganisation in 1974 when Prescot – hitherto under Lancashire County Council – was incorporated into the new Knowsley Metropolitan Borough Council which only came into being, it was rumoured, because Harold Wilson, prime minister at the time wanted his Huyton constituency to be separate from Liverpool. In fact, the reorganisation saved Prescot; the County Council had been working its way through its historic town centres, demolishing historic buildings and constructing modern concrete shopping centres. Huyton was ‘improved’ in this way just before the deadline. Prescot was next on the list and then Ormskirk.

Prescot town centre was in the terminal stages of ‘planning blight’. If you put in a search for a property you were buying, up would come an ‘earmarked for development’ card and the property would be condemned to neglect and decay. It has to be said that there was considerable opposition at the time to any idea of saving Prescot’s heritage even though Prescot was at one time the most important town in south Lancashire: in the 18th century Liverpool’s postal address was ‘Liverpool near Prescot’. At this time Prescot was renowned as a centre for the watchmaking industry and became very prosperous – it was reported that the town’s vicar rode around on a horse shod with silver. By the 70s, although many listed buildings had survived, a lot were in a poor condition. I was assured by a veteran senior Council official, putting great emphasis into each word, that saving Prescot’s heritage would be ‘a waste of public money’. You have to say that in a woolly-back accent to get the full effect.

Nevertheless, being an awkward sod, my starting point for the plan was to designate the town centre as a conservation area thus removing the blight. A town scheme, funded by the Borough Council, Merseyside County Council and the government, was set up via which grants were given to owners to improve their properties. The main shopping street was  pedestrianised and landscaped. A major store was constructed on a large derelict site, but with access from the main street (Not so sure about this now – big stores on the edge of town centres often kill off local shops, but hey-ho). Derelict historic buildings in Council ownership were refurbished by Community Industry who trained local unemployed young people in building skills. A museum of watchmaking in a prominent listed building was set up. An archaeological survey of the town was carried out by Peter Davey of the Merseyside Archaeological Society, which showed that Prescot’s medieval street pattern, centred on the circular churchyard on a hilltop site indicative of Celtic settlement – had survived intact. Interestingly the remains of medieval buildings survived inside property rebuilt in the 18th century boom period. And the site of the first Elizabethan theatre outside London was identified…

Looking back, I now realise that I was extremely lucky to have a job that I loved: a job where you face a problem, work out a solution and then make it happen. All these years later, it is heart-warming to see something like Shakespeare in the North about to reach fruition.

I have seen some curmudgeon-ish comments in the local media about the cost of the new  theatre in the light of Knowsley’s deprivation and poverty. But in a later career in regeneration I grasped the truth that you’ve got to identify your assets and make the most of what you’ve got. The new theatre will create jobs for local people and bring in visitors who will spend cash in local pubs and restaurants. It will assist the regeneration of the town and the area generally. I might even go and watch some of the plays they put on. Being a miserable, as well as an awkward, sod, I like the tragedies.